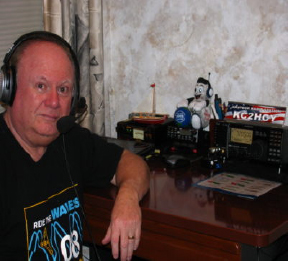 GSARA member Ned G. Meyer, KC2HCY from Ocean, New Jersey, died on September 16, 2021, age 76, after a heroic battle with cancer.  Ned was born on February 25, 1945 in Lakewood, New Jersey, to Martin and Sally Meyer.  He graduated from Lakewood High School in 1963, and Parsons College, in Fairfield, Iowa, in 1967, and became a Certified Public Accountant.

Ned returned to New Jersey to start his family in Toms River, and to join the accounting firm his father founded in Lakewood.  Generations of clients relied on Ned’s no-nonsense approach and trustworthy accounting expertise for over 40 years.

Ned loved adventure and pursued hobbies that included big toys.  He took his young family on camping expeditions all over the Northeast, trailing a pop-up camper on his wood paneled, Chevrolet station wagon.  Later he became a licensed private pilot, and flew single-engine planes all over New Jersey and the east coast.  After that, he became an avid sailor, cruising up and down the Toms River and Barnegat Bay, and most recently captaining his boat around the Chesapeake Bay.  Ned was also a devoted ham radio operator, challenging himself to make contact with operators in all 50 states and many foreign countries.

Most of all, Ned cherished his wife, Fran, his family and his Jewish faith.  He and Fran hosted the family’s multigenerational Seders and Hanukkah celebrations, taking very seriously his responsibility to keep the extended family connected to the rituals and traditions of his parents.  Everyone was welcome and everyone was expected.  He took special pride in seeing his grandchildren become b’nei mitzvah.

Ned is survived by his devoted wife of 36 years, Fran Meyer (nee Semel), his sons, Alan and Stanley (Shoshanna), his stepsons, Charlie Weiss (Debby) and Rod Weiss (Pam), and grandchildren, Ezra, Nate, Jaden, Ethan, Nicole and Joshua. He will be dearly missed by his sisters, Rita Harris and Doris Loigman, and beloved nieces and nephews.  He was predeceased by his parents, and his beloved brothers-in-law, Sid Harris and Bernie Loigman.