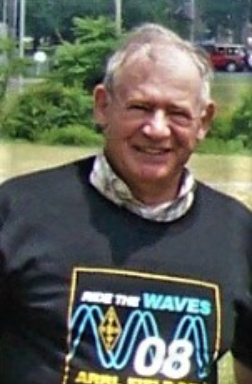 Joe Dreifuss, W2KQ passed peacefully at 0430 on September 22, 2021. He was 86. Joachim Dreifuss was born to a Jewish family on November 26, 1934 in Karlsruhe, Germany (yes, the same city that Heinrich Hertz conducted his famous experiments with electromagnetic waves fifty years earlier). In 1939, with the Jewish situation in Germany turning dire, Joe’s family sent Joe and his older sister to safety in England. His and his sister were the only survivors of the family (ed.) Joe eventually settled in the United States.

When asked how he got started with amateur radio, Joe submitted the following account to John, KA2F. This compelling story is worth sharing to all members of GSARA.

It all started in the basement of an apartment building in NYC. Our superintendent repaired radios and TV’s in the basement; he taught me how to wire, solder and check tubes and eat Mustard and Sardine sandwiches. From there I went to an enterprising schoolteacher that taught us how to build a Crystal Set and after building the set I became a BCL (Broadcast Listener). Then for many years after that I became a SWL when I built a radio capable of listening to short wave. The Boy Scouts taught me Morse Code, Semaphore and WigWag.

I was called to active duty and became a Forward Observer after code school. I used to get off frequency and chat with other military operators. I still remember my call (4JN2). It cost me a stripe.

I got smart and wangled my way into school at Ft Monmouth and became acquainted with the MARS Station. I met some hams who convinced me to get a license. I was ready for a trip to NYC but got detoured to Ft. Devens, Mass. I found myself in a fully mobile Theater Communications Group. Everything on wheels: about 103 Vehicles. I went on a 5-state maneuver with that outfit and enjoyed every minute of it. No time for a ham license. I returned to Ft. Monmouth and more schooling and no time for ham radio. I went back overseas again, this time to France. Met my wife, got married and there was no time for Ham Radio again.

I got a call one day informing me that I was being transferred to a Submarine Cablehead outside of Cherbourg, France mainly because I was a CW operator and trained as a Transmitter/ Receiver repairman. I also had to go to school again and learn Cable operations and maintenance. We moved to Cherbourg where I met my Elmer, Gilbert, F8TZ who convinced me to get a license. Also met Henry, F7BQ who allowed me to get on the air using his call and name.

I tried to get back to the US to take my test but the Army would not cooperate. My Elmer said why bother with a US license: take the French test.

I started to prepare for the French test: First, learn how to read French and Second, even more important, understand it. My Elmer said “no problem. The inspector probably speaks English.” Oops, I forgot to mention that I would not be going to Paris for the test, the Inspector would give me the test at my home in Cherbourg.

The Inspector from the PTT (Post Telegraph & Telephone) arrived on time with Test Equipment and a CW Tape machine and NO English. My Elmer, F8TZ tried to assist with the French but the Inspector told him to not interfere in the process or I would fail. (I guess he must have set the standard for our club VE’s).

I passed the Code Test, had to explain in French the function of the different components in the Transmitter and Receiver. I tested the grounds, explained the operation of the Antenna System (G5RV) and took the written test in French.

After some more discussion over a bottle of wine, the Inspector left. My Elmer said, “I think you failed.” It turned out I passed and got the results a week later. Later I had to say au revoir to Hank, F7BQ and became F7GX. Joe the Franco-American Station in 1958.

Uncle Sam finally authorized a brief trip back to the US in 1959 and I received a General Class license, WA2GSY and a brand new daughter.

I was transferred back to the US in January 1960 and assigned to the Pentagon Transmitter site in Greencastle, PA. Our daughter #2 arrived on schedule.

I received orders for Teheran, Iran in late 1960 and proceeded to pack (Ham Gear, of course). My orders were changed to Paris, France. I was assigned to the Armed Forces Broadcast Network in Paris. I put F7GX back on the air and, due to heavy travel requirements, went mobile (Gonset Twins a Master Mobile Antenna). I worked over 170 countries mobile and fixed. I picked up another call DL4MZ while operating from Germany. I met Louis Varney, G5RV and many other DXers and active hams from around the world.

My first experience with an expedition occurred when G5RV proposed a trip to Andorra, PX1 (now C31) after getting licensed as PX1GX and G5RV as PX1RV. We set out for Andorra: my plan was to operate mobile with a Gas Generator for power from the top of the mountains and with G5RV from the Hotel in the valley. Upon arriving at the border for a customs check, I was asked if I had anything to declare. Even though the car was full of commercial radio gear, I told them no and passed through. G5RV told them yes and they took his car apart looking for contraband. Six hours later we were on our way to Sant Julia de Loria, Andorra.

We drove up the mountain and made many contacts when suddenly we were surrounded by some pretty menacing people. They turned out to be smugglers. Once they learned what we were doing and that we were not the police, we were treated royally for the remainder of our week stay.

I was transferred again to take over the South Western Armed Forces Broadcasting Network Headquartered in Poitiers, France. Here I became active with the local Amateur Radio Club Dept. 86 of the REF. We set up a school for teaching Amateur Radio practices and Morse code. I assisted in the club winning the National Coupe Du REF (actually all the effort was Joe’s). They made me Citizen of Honor of the city of Poitiers, France, and Honorary Member REF Section 86 and awarded me with Merite du REF 1965.

Since I held a French ham radio license, I was able to enter the competition of the annual all French contest, the Championship of France (Championnat de France Radioamateurs) in 1965. It was split in two parts: CW for two days and Phone for two days immediately following. In the CW part there were 129 entries and F7GX scored in first place with almost three times the number of points of the French-born ham in second place. In the Phone part there were 166 entries and I scored first place again with almost 2 ½ times the points of the second place Frenchman. Incroyable! Unbelievable! Jamais fait auparavant! Never done before!

I went back to Ft. Monmouth as WA2GSY on the air from Eatontown for a few months; then I was sent over to Korea as HL9KQ.My wife Fran and the kids decided to go to France while I was in Korea.She got on the air as F5ZB and we talked nearly every day.I left Korea for Ethiopia 1968-69 where I operated as ET3USA.I travelled frequently to Teheran and operated as EP2USA.

I was inactive 1970 thru 1988 until I started working satellites from home in Ocean, N.J., being very active with the MIR Space Station, relaying messages from the Space Station after the USSR collapsed.

Finally, I got back to HF CW where I pretty much stayed since. I enjoy helping Garden State ARA at Field Day and even served as President, Treasurer and Trustee of the club and as Chairman of their semiannual hamfests. Regarding HF operating I think the most fun I have had in a long time was with the ARRL Centennial radio activities, achieving Centennial WAS (W1AW/P) and the Centennial Points Challenge Award with 16,903 points.

The following expression of gratitude for Joe appeared in the French amateur radio November 1965 journal Radio REF, the equivalent of our QST magazine.

As these lines are being read, our friend Joe, WA2GSY, better known in France under the call F7GX, will be on the point of leaving us, after a stay which we would wish to have been much longer.

Having arrived in Poitiers three years ago, after having passed through Cherbourg and Chatou, it is up to us hams in Poitiers, department REF 86, to thank F7GX for his ham radio activity while in France, especially for the traffic plan for the REF and the publicity and programs for youth.

It was from Cherbourg that the first radio signals from F7GX came through the French airwaves to the great joy of hams both in France and abroad and for French hams in French territories across the world. Among these F7GX can count numerous friends who have not missed visiting Joe while they were visiting France. The resulting spirit of friendship and sense of hospitality, sketches of him and images painted in words and especially the Medal of Merit of the REF awarded since his last contest achievement (1964 Championship of French Radio Amateurs), all of these can never be expressions of enough thanks for Joe.

During the years in France F7GX boiled over with ham radio activity and numerous diplomas and awards adorn the walls of his station. Among these is the DUF 4 Phone award, of which Joe is especially proud and his great success in the 1964 Championship of France, where he scored First Place in both CW and Phone.

The publicity he generated for amateur radio was extremely intense not only with the general public but even at home where he convinced his YL Fran to become WB2SZB.

This is the end of Joe’s “Starting Out” article. Since writing that, he was awarded the “Grand Ole Ham” award in 2016 by the Hudson Division. As far as I know, he was the only GSARA member to ever receive this well-deserved award.

I think that Jim Griffith, K2EI said it best, “He knew his stuff and was always ready to share. Joe epitomized the best in amateur radio service and camaraderie.”

Our condolences to the Dreifuss family.